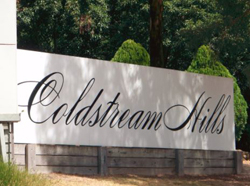 "Since its first vintage in 1985, Coldstream Hills has grown to be one of Australia's leading small wineries. With a reputation for producing outstanding single vineyard and reserve wines Coldstream Hills has a particular focus on the internationally heralded varieties, Chardonnay and Pinot Noir... Winemaking techniques and philosophies haven't changed with the growth in production that is still designed to produce elegant wines with a particularly fine and long finish. In addition to Pinot Noir and Chardonnay, Coldstream Hills produces Merlot, Sauvignon Blanc, Cabernet Sauvignon and sparkling wine, across three tiers and offerings.

Wine writer, judge and personality James Halliday founded Coldstream Hills in 1985; although he has since retired from winemaking, James remains active within the business. For the past decade, Andrew Fleming, along with fellow winemaker Greg Jarratt, has led the Coldstream Hills winemaking. Testament to their combined talents, Coldstream Hills wines have received ongoing recognition at some of the country's most esteemed wine shows, cementing its position as not only one of the regions great wineries, but also one of the great wine producers of Australia." - Coldstream Hills