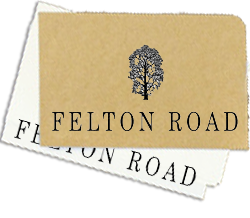 "Both of Felton Road's Pinot Noirs are breakthrough efforts in New Zealand, and compete with the finest wines being made in California, Oregon and Burgundy's Cote D'Or." - The Wine Advocate (issue 122) Robert M. Parker, Jr, U.S.A.

"Eighteen years after being bought by Englishman Nigel Greening, Felton Road has gate-crashed the top 10 in the Most Admired list after debuting at number 13 last year, putting it hot on the heels of Villa Maria for the honour of highest-ranking Kiwi producer... Felton Road has a zero-growth policy for environmental reasons and the prestigious Central Otago Pinot Noir for which it is best known – along with its Chardonnay and Riesling whites – is sold principally on allocation, with loyal trade customers first in line... Greening’s business ethics mean he resists artificially ramping up prices as the Felton Road reputation grows." - Drinks International

"Felton Road wines is located in Bannockburn, Central Otago in New Zealand, the most southerly wine growing region in the World. Here, vineyards are nestled into small macroclimates totally surrounded by high mountains, many of which are snowcapped all year round. Though the location is on the edge of sustainable viticulture these macroclimates consistently combine hot days, cool nights and long dry autumns: perfect for the creation of fine Pinot Noir, Chardonnay and Riesling. The latitude of 45 degrees south is similar to the Willamette Valley in Oregon and some of the finest wine regions of France. Central Otago is New Zealand's only wine region with a continental climate rather than a maritime one. This brings the risk of frosts but has the benefit of low rainfall and high sunshine hours. Of the five distinct macroclimates so far identified in Central Otago, Bannockburn, with its gentle north facing slopes and deep loess soils seems well suited to the production of complex Pinot Noir." - Felton Road