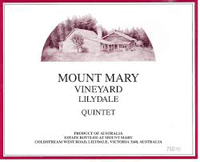 Mount Mary commands a mythical status among wine collectors. Quintet is a Cabernet Sauvignon, Cabernet Franc, Malbec, Merlot and Petit Verdot blend. The vineyard faces due north and captures optimum sunlight during the growing season. New French Oak plays an underlying role in the style. Owing to vine age, the wine has become richer and more complex during the 1990s. It exhibits a purity of fruit, poise and structure found in few Australian Cabernets with cedar and blackcurrant aromas, fine-grained savoury tannins and superb flavour length. Quality is usually outstandingly good, although as a single vineyard wine, the vagaries of vintage can come into play. Quintet resonates an individuality of place and Dr John Middleton’s fastidious respect of the landscape. - Andrew Caillard MW

One of our first reds from what has since become known as the 'Bordeaux blend' of cabernet sauvignon, merlot, cabernet franc and malbec, which have since been joined by the remaining Bordeaux red grape, petite verdot. A fine, classically-structured claret style proven time and again in the cellar. The only Yarra Valley wine consistently made to this standard. - Jeremy Oliver

Superbly refined, elegant and intense Cabernets and usually outstanding and long-lived Pinot Noirs fully justify Mount Mary's exalted reputation. The Triolet blend is very good, more recent vintages of Chardonnay likewise.(The Quintet was) First made in 1977; one of few wines in Australia to include in its makeup the five classic grape varieties of Bordeaux: cabernet sauvignon, merlot, cabernet franc, malbec and petit verdot. This wine is Mount Mary¹s finest; at its best the ultimate expression of the style, at its least showing that the climate of the Yarra Valley can treat the later-ripening varieties with harshness. - James Halliday