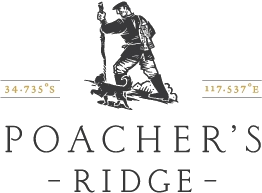 "Alex and Janet Taylor purchased the Poacher's Ridge property in 1999. It had previously been used for cattle grazing. The vineyard includes shiraz, cabernet sauvignon, merlot, riesling, marsanne and viognier. Winning the Tri Nations 2007 merlot class against the might of Australia, NZ and South Africa with its '05 Louis' Block Great Southern Merlot was a dream come true. Nor was it a one-time success: Poacher's Ridge Merlot is always at, or near, the top of the tree." - James Halliday

"Founded in 1999 by Alex and Janet Taylor, Poacher’s Ridge is nestled amongst the undulating hills of the Great Southern, on the western outskirts of the small townsite of Narrikup. We took our name after being mistaken for sheep rustlers when first inspecting this ancient land. We knew right then that we’d found a place of story and promise. A place where the distinct terroir now imbibes the wine with a certain complexity only found from our small patch of dirt.

A small, family-run vineyard, consisting of Alex, Janet, Marcus and Andrew Taylor, and Winemaker Robert Diletti, we take great care producing hand-crafted wines driven by the land, the seasons and a dedication to honest winemaking traditions. We hand-tend our twenty acres under vine, cultivating grapes that best reflect the lay of the land and the style of wine we love to drink: cool-climate, mediumbodied varietals, with a particular focus on Riesling, Marsanne, Shiraz, Merlot and Cabernet Sauvignon." - Poacher's Ridge