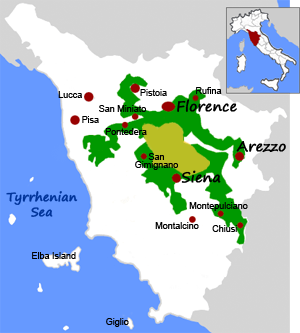 "In addition to splendid landscapes, Chianti's popularity is also directly tied to its fine red winesproduced in the region and known generally as Chianti wine. The Chianti region, extending roughly over the two main city provinces of Florence and Siena, is characterized by a combination of almost perfect weather and soil that produces a precious wine considered one of the best wines around the world.

The tradition of cultivating vines in Chianti goes back a long time in history, back to the Etruscans that inhabited the area before the Roman empire. Thanks to written evidence dating back to these times it is now known that the Etruscans not only cultivated vines and conducted experiments on grafting and creating hybrids but also produced wines that were widely appreciated... In 1932 the Chianti area was completely re-drawn and divided in seven sub-areas: Classico (the more well-known of the Chianti wines; production is limited to area between Florence and Siena), Colli Aretini, Colli Fiorentini, Colline Pisane, Colli Senesi, Montalbano and Rùfina...

The grape of excellence is Sangiovese, and for a Chianti to be bear the word Chianti on the label, not only must it be produced in the Chianti region but it must also contain at least 80% Sangiovese grapes. The remaining amount can be a mix of other local grapes or an international grape (however only if it is grown in Chianti) Cabernet, Merlot or Syrah used to soften the final product." - Chianti.com