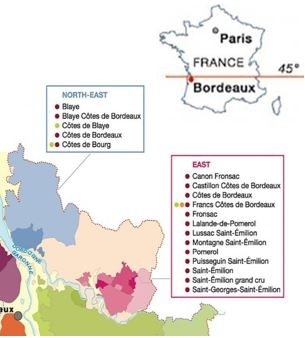 "Thanks to variations in soil, climate and grape varieties, Right Bank wines have a different feel to those of the Left Bank. Often lighter and less tannic, these wines can often be drunk relatively young as far as Bordeaux wines go. While the Right Bank may not be as famous as its counterpart across the water, it still contains two prestigious appellations: Pomerol and Saint-Émilion. There are also smaller appellations such as Blaye, Blaye-Côtes-de-Bordeaux and Côtes-de-Bourg.

Merlot grapes dominate the Right Bank, although Cabernet Franc is also frequently used. There are also some areas planted with Cabernet Sauvignon, Malbec and Petit Verdot...

Pomerol is the smallest major fine wine region in Bordeaux... Although Pomerol used to produce predominantly white wine, Pomerol wines are now exclusively red. Using mostly Merlot blended with some Cabernet Franc, these wines are often described as being halfway between the soft fruitiness of Saint-Émilion and the more austere, tannin-rich Médoc wines.

The large Saint-Émilion AOC sits just east of the city of Libourne on the Right Bank. It has its own classification, which started in 1955 and — unlike the Left Bank 1855 classification — is regularly updated... Saint-Émilion wines tend to be fruity and fresh compared to the more austere Left Bank wines. As with many Right Bank regions, Merlot tends to dominate Saint-Émilion wines, with Cabernet Franc typically added to impart more texture and complexity." - Airoldi