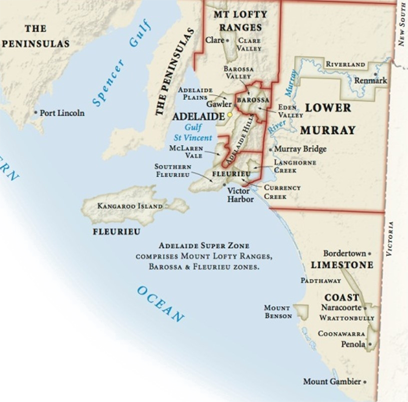 "South Australia is home to some of our most iconic and best-loved wine regions. Producers in the historic Barossa Valley, dynamic McLaren Vale and esteemed Coonawarra, for example, have long enthralled wine lovers with their trademark, fruit-forward red wines. They are among the regions that have collectively helped put Australia on the world wine map. While these regions’ reputations deservedly remain, a quiet evolution of wine styles and addition of other flagship varieties has meant there has been enormous change in recent times.

These coveted regions can no longer be summed up by any one wine or style. The Adelaide Hills and Riverland are just two other hotbeds of innovation, with some of the country’s most experimental producers between them. From cool-climate pinot noir to minimal intervention styles and food-friendly alternatives, the diversity is rife.

Reds may have historically stolen the spotlight, but Eden Valley and Clare Valley are responsible for some of Australia’s finest rieslings, while the rugged, maritime climates of various South Australian regions help produce fine chardonnay, among others. There is so much to discover." - Halliday Wine Companion